Q - WHAT TYPES OF SCRIPTS CAN BE IMPORTED IN SCRIPTE SYSTEMS SOFTWARE?

A - All ScriptE Systems softwares will import most properly formatted scripts with defined page breaks and scene numbers.  The three most common script types are:
​
FINAL DRAFT (extension .fdx)
PDF (with the extension .pdf)
MOVIE MAGIC SCREENWRITER (must be exported to the .mmx format)

WORD, CELTIX  scripts created in the any other software (most commonly MS WORD, or CELTIX) but really from any other format can also be imported if they are properly formatted (with defined page breaks and scene numbers) and turned into a .pdf.

FINAL DRAFT  (.fdx) - For final draft scripts, defined page breaks are required this means LOCKING PAGES and then saving the final draft script. Locking the pages must be done in final draft. So if you don’t have access to final draft you will need to ask production to lock the pages, save then file and re-send it to you.  Also, the script should have visible scene numbers. If it doesn’t have production add those in. Scene numbers are very important!

MOVIE MAGIC (.mmsw or .mmx)  - ScriptE created in MM Screenwriter (or Screenwriter) have a special export just for ScriptE Systems softwares. In the MAC version of Screenwriter — look under the EXPORT options for .mmx output.

Q - HOW DO I LOCK THE PAGES IN FINAL DRAFT? 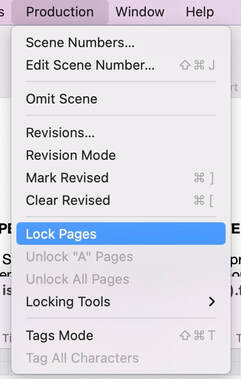 1) Open the script in final draft. Look under the PRODUCTION PULL DOWN MENU - select LOCK PAGES - if you only see LOCK A PAGES - that means that the pages have already been locked - but go ahead and lock the A pages.

2) SAVE the file — it should now be ready to import
​
​3) If you are working on one of our iPAD applications, you should then send the script to your email address for importation.

FINAL DRAFT SCRIPTS —  Because Final Draft scripts encode each block of text as a given  scene element (SCENE HEADING, DIALOG, ACTION, TRANSITION, etc.) it is usually the cleanest type of script to import. Consequently, if a Final Draft script isn’t importing it is usually one of two things: UNLOCKED PAGES (discussed above) or mis-formatted script elements.


PDF SCRIPTS — If a .pdf script appears to be properly formatted (has scene numbers and locked page breaks) one of several things could still be keeping the script from being importable: ENCRYPTION or NON-STANDARD FORMATTING.

ENCRYPTION - If the script has been sent to you via SCENECHRONIZE or some other distribution email application - it very well may be encrypted.  Encryption blocks the script from being imported.

Solution - Simply ask your script coordinator for either a locked final draft copy of the script or a regular .pdf of the script.

If all this fails remember you can always send us the script and we will examine it and send you back a step by step on importation.

Q - WHEN IS IT SAFE TO UPDATE MY SOFTWARE?

It is usually safe to import any update to ScriptE Systems softwares. That said, occasionally there are odd compatibility issues so as a general rule of thumb, don’t update in the middle of a shoot day and don’t update until you have synched any remote or 2nd unit files with the master file.  If you aren’t having any problems, we recommend holding off on any updates until the weekend or in-between jobs.

Make sure that your iPAD or COMPUTER is set to always ask you before updated OS or iOS. Often computers are defaulted to automatically update - this is a big no no!

Please check with ScriptE Systems prior to updating your OS or iOS (either through the Facebook discussion page DIGITAL SCRIPT SUPERVISOR, or by writing us at:
techsupport@scriptesystems).

We never recommend updating OS or iOS in the middle of a job unless you are having some performance issue.

Q - WHAT IS THE BEST WAY TO WORK WITH A NON-TRADITIONAL SCRIPT - OR NO SCRIPT AT ALL (DOCUMENTARIES, REALITY TV SHOWS, COMMERCIALS)?

Q - WHAT IS THE BEST WAY TO USE SCRIPTE FOR COMMERCIALS?

Q - WHAT LABEL PRINTER DO YOU RECOMMEND USING WITH DH COSTUME?